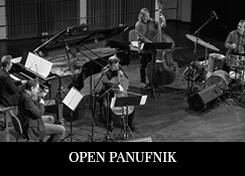 The year 2014 marked the 100th anniversary of the birth of the great composer Sir Andrzej Panufnik, an artist that bound two cultures: Polish and English. In 1954 he left socialist Poland for Great Britain, where he then lived and wrote his music. He came back home as late as 1990 and instantly triumphed in the concerts of the Warsaw Autumn Festival. Inspired by Panufnik’s works, we decided to start a project that combines the world of classical music with that of jazz. We embarked on an exciting musical adventure by performing the original works by Panufnik as well as those by Panufnik’s daughter, Roxanna. The open formula of the compositions along with their accessibility make for a perfect basis for experimentation. Our programme includes the classic versions of the Piano Trio and Roxanna’s Around Tree Corners juxtaposed with our jazz adaptations of these works. The specially written Double Piano Trio piece is meant to serve as a form synthesis and round-up of the whole project.

The trio, which was formed for the purpose of the project, is made up of musicians who have considerable performing and recording experience. All of them are Bydgoszcz-based and all have supported and collaborated with a number of artists. The three are bound by a similar understanding of the musical world and their artistic paths have often crossed. The result is excellent stage teamwork and thus a perfectly fluid musical narration. The three are also teachers at the Feliks Nowowiejski Academy of Music in Bydgoszcz.

The pianist and arranger Michał Szlempo wrote all the jazz adaptations for the project. His exceptional talent for arranging music earned him recognition in a 2010 competition for interpreters of Chopin’s works, in which he also won the 1st prize. He has appeared in a number of concerts at home and abroad. Together with the 012 Acoustic Quartet he won the 1st Prize in the 2nd ’European Music Integrations’ Festival in Żyrardów (2006), and the 2nd Prize in the 1st Student Jazz Festival in Bydgoszcz (2009).

A versatile bassist, feeling equally at ease with the bass guitar as well as with the double bass, Grzegorz Nadolny is a Bydgoszcz musician who for many years has been the essential element of a number of local bands. He is also a popular session musician. He has recorded dozens of albums with a wide range of artists. Apart from keeping himself busy performing he also publishes articles on music culture in local as well as national newspapers and magazines.

The percussionist Piotr Biskupski boasts wide experience in collaborating with the best Polish jazz musicians. He is frequently invited to perform with artists representing a variety of music genres. He has recorded over 30 albums. He is also an acclaimed teacher and head of the Jazz and Popular Music Department at the Bydgoszcz Academy of Music, where he teaches his own percussion class. He has also led numerous jazz and percussion courses. He is considered technically perfect, being among those few who have the capacity of rendering an infinite array of tone shades and moods. He was awarded the Gloria Artis medal for his outstanding contribution to national cultural heritage.

(the Double Piano Trio may be performed with a string orchestra)