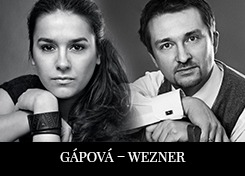 Ingrida Gápová was born in Slovakia. Her musical education began at the age of six, when she learnt the rudiments of piano playing. She continued her education at the Conservatoire of Žilina and then at the Academy of Arts in Banská Bystrica in a vocal class. She later pursued her graduate studies at the Feliks Nowowiejski Academy of Music in Bydgoszcz.
In 2013 Ingrida won the 3rd Prize in the opera category and five special prizes (among them for the best interpretation of an opera part by Wolfgang Amadeus Mozart) at the Antonín Dvořák International Singing Competition in Karlovy Vary (the Czech Republic). She is also a winner of the Selma D and Leon Fishbach Memorial Prize at the 2015 Handel Singing Competition in London (UK).
Ingrida regularly performs in major Polish opera houses, singing the parts of Pamina, Susanna and Barbarina from Mozart’s The Magic Flute and The Marriage of Figaro, Micaëla from Carmen by Georges Bizet and Annina from La Traviata by Giuseppe Verdi (Baltic Opera in Gdańsk), Gretel from Engelbert Humperdinck’s Hänsel und Gretel, Hanna from Stanisław Moniuszko’s The Haunted Manor and Belinda from Henry Purcell’s Dido and Aeneas (Opera Nova in Bydgoszcz). At the Polish National Theatre in Warsaw she has also sung Xenia in Modest Mussorgsky’s Boris Godunov and Barbarina in Mozart’s The Marriage of Figaro, and it also where she performed the main role of She in the world premiere of the contemporary Polish composer Aleksander Nowak’s opera Sudden Rain. Moreover, she appeared in the première of another work by Nowak and the multimedia artist Adam Dudek, Spoon River, commissioned for the opening of the 56th Warsaw Autumn Festival in 2013.
Ingrida collaborates with the Spanish ensemble ’Taller Atlántico Contemporáneo’ (TAC), with whom she performed at the 53rd Religious Music Week Festival in Cuenca and the 63rd International Festival of Music and Dance of Granada, where she appeared in the world premiere of Cinco Guerreros by Sebastián Mariné.
With Goldberg Baroque Ensemble from Gdańsk she recorded the world premieres of The Christmas Cantatas of 18th-Century Gdansk (2010), The Lent Cantatas of 18th-Century Gdansk (2011) and Johann Balthasar Christian Freisslich’s Passio Christi (2012), released by Sarton, a Warsaw-based record company. The last work was nominated for the 2013 ’Fryderyk’ Music Awards.
In October 2015 Ingrida worked with the Warsaw National Philharmonic Orchestra under Jacek Kaspszyk while on their European concert tour with Gustav Mahler’s 4th Symphony.