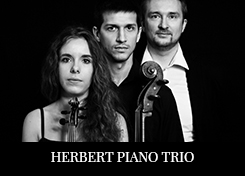 “(…) Mr. Cogito
suspends without answer
reflexions on the essence of music

the momentum with which it forces
its way into our interior (…)” 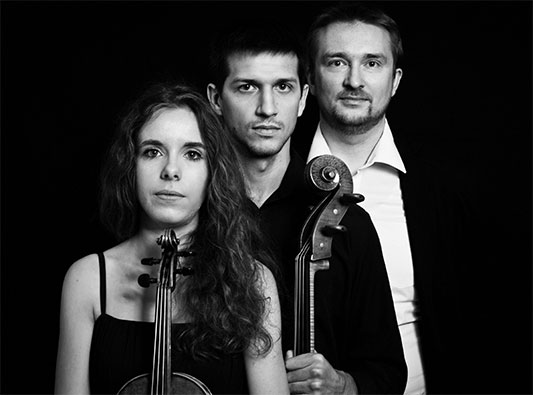 The trio, named after the great Polish poet Zbigniew Herbert, was formed in 2013 and a year later started collaboration with the Warsaw-based Zbigniew Herbert Foundation. The trio’s members, Bartłomiej Wezner (piano), Joanna Kreft (violin) and Dominik Płociński (cello), are all former students of distinguished teachers and outstanding artists: Ewa Pobłocka, Marcin Baranowski and Andrzej Bauer. They have also won prizes in prestigious international competitions (London, Warsaw, Baku). Herbert Piano Trio have given concerts at such well-known venues in Poland as the Polish Radio Concert Studio in Katowice, the Chopin Centre in Szafarnia, or the Lubostroń Palace. The ensemble’s repertoire spans a variety of classical as well as contemporary works, with special importance, however, given to an interdisciplinary project which combines music with readings of Zbigniew Herbert’s poetry. The project features Marian Jaskulski, an actor of the Hieronim Konieczka Polish Theatre in Bydgoszcz. In June 2015 Herbert Trio received a grant from the Beethoven-Haus in Bonn (Germany) to participate in a seminar and workshop taught by Prof. Clive Brown in cooperation with Trio Jean Paul. 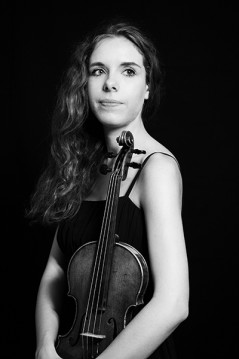 Joanna Kreft (violin)
Joanna was a semi-finalist in the 14th International Henryk Wieniawski Violin Competition in Poznań (2011), where she also received two special awards for the best musician representing 1. the city of Poznań and 2. the region of Greater Poland. For winning the Grand Prix at the Music Festival and Masterclass in Piła (2012) she was honoured with the opportunity of giving exclusive concerts with the best Polish orchestras. Joanna is a winner of the International Karol Lipiński and Henryk Wieniawski Competition for Young Violinists in Lublin, and the International Karol Szymanowski Competition in Łódź. She is a recipient of scholarships awarded to her by the Minister of Culture (the ’Young Poland’ Scholarship Programme) and the Hans and Eugenia Jütting Foundation. She is a graduate of the Ignacy Jan Paderewski Academy of Music in Poznań, where she is presently also a teacher. As a soloist she has performed with such chamber orchestras as the Polish Radio Chamber Orchestra ’Amadeus’ under Agnieszka Duczmal, the Tychy Chamber Orchestra ’Aukso’ under Marek Moś, the ’Feel Harmony’ Orchestra under Bartłomiej Nizioł, the Münchener Kammerorchester, or the State Youth Orchestra of Armenia under Sergey Smbatyan. 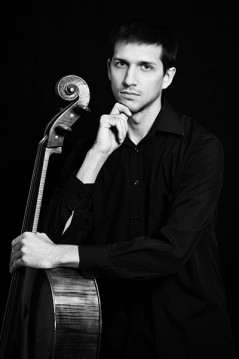 Dominik Płociński (cello)
In February 2013 Dominik won the 2nd Prize in the 9th International Witold Lutosławski Cello Competition in Warsaw. In May the same year he received an award from the Minister of Culture and National Heritage, having won the Concert of the Year Competition for the best students of Polish state higher education musical institutions. He is a winner of a number of competitions at home and abroad, such as the 4th International David Popper Cello Competition in Varpalota (Hungary, 2009), or the Kazimierz Wiłkomirski Youth Cello Competition in Poznań (2006). Dominik is a graduate of the Fryderyk Chopin University of Music in Warsaw, where he studied under Prof. Andrzej Bauer. He has performed at such venues as the National Philharmonic Hall in Warsaw, the Witold Lutosławski Polish Radio Concert Studio in Warsaw, the Tadeusz Baird Philharmonic Hall in Zielona Góra, the splendid Ballroom of the Łańcut Castle, the Philharmonic Hall in Lviv (Ukraine), and the Royal Festival Hall in London (UK). He is a member of the Warsaw ’Cellonet’ Group, with whom he has appeared in a number of festivals, such as the ’Premieres’ Festival in Lviv, the Musical Tradition and Avant-Garde Festival ’Codas’ in Lublin, the Bronisław Huberman Cello Festival in Częstochowa, the Artus Jazz Festival in Toruń, or the World Premieres Music Festival in Katowice, to name but a few.

This site uses cookies to provide services at the highest level. Further use of the site means that you agree to use them.CloseRead more